C# 7 and Visual Basic 15 introduced the notion of value tuples. The concept is similar to what you may find in System.Tuple but with two important distinctions:

How does it affect the obfuscation? Let's take a look at C# example:

(A side note: currently you also have to reference System.ValueTuple NuGet package to make the value tuples work)

The given method Calc can be used like this:

Please note that method Calc returns a value tuple with two named fields: sum and count. Do those names find their ways into resulting .NET assembly? The short answer is yes. They are specified by C# compiler behind the scenes with TupleElementNamesAttribute as shown below:

This is how it looks after compilation: 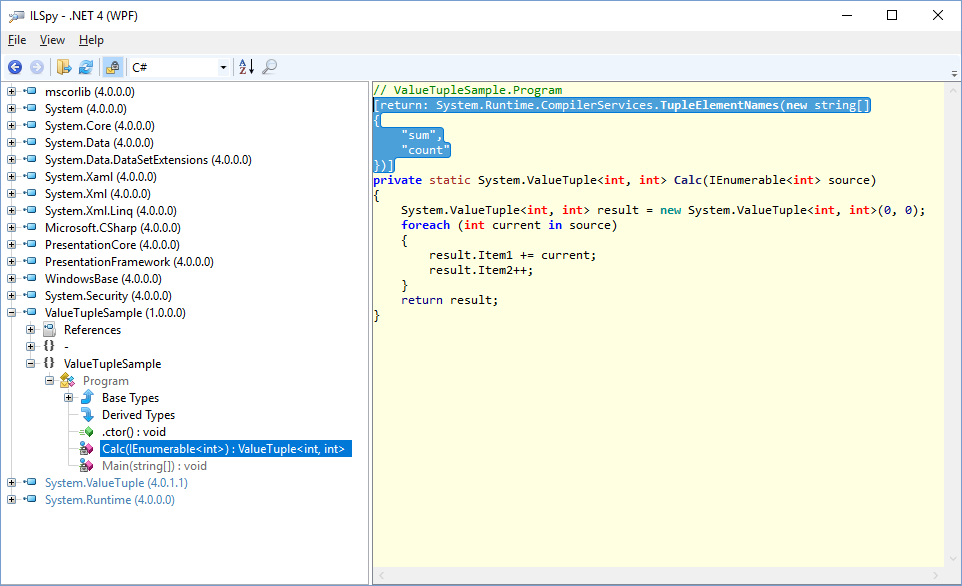 As you can see, the field names of value tuples basically become the part of .NET assembly metadata. And they will stay there disclosing the private implementation details to the outside world even when you build the assembly in Release configuration.

You can automatically strip the unneeded field names of value tuples by obfuscating the assembly with Eazfuscator.NET:

Starting with version 5.6, Eazfuscator.NET fully understands the semantics implied by value tuples and takes care to automatically prune the unused value tuple metadata, including the aforementioned field names. Such transformation is a win not only in terms of security, but it also saves bandwidth bringing faster startup performance during runtime.